The other night my wife and I sat down to watch the classic screw-ball comedy My Favorite Wife and I have to say it was just as enjoyable to watch the second time around. It isn't often I find myself laughing out loud watching a movie, but I just couldn't help myself. One of the funniest scenes is when Nick Arden (Cary Grant) is telling his new wife Bianca (Gail Patrick) that he has had to leave suddenly and wouldn't be able to finish their honeymoon, only to walk out of the phone booth and literally run right into her. There is a great plot that leads the way into some very comedic performances. In my opinion, Cary Grant stole the movie from the two leading ladies. I found Irene Dunn's acting a bit grating at times and I never warmed up to Gail Patrick. This is definitely a classic movie worth having in your collection. 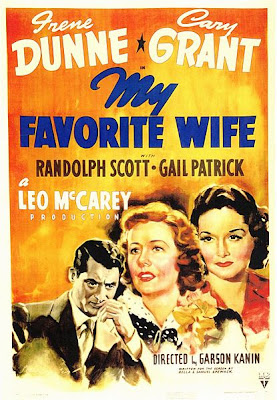 MOVIE INFORMATION:
Produced by Leo McCarey
Written by Leo McCarey, Samuel and Bella Spewack
Starring Irene Dunne, Cary Grant, Randolph Scott, Gail Patrick
Distributed by RKO Radio Pictures
Release date  May 17, 1940
MOVIE PLOT:
After seven years, lawyer Nick Arden (Cary Grant) has his wife Ellen (Irene Dunne), missing since her ship was lost, declared legally dead so he can marry Bianca (Gail Patrick). It turns out however that Ellen was merely shipwrecked on a deserted island, and has been rescued. When she returns home, she learns that Nick has just left on his honeymoon with his second wife.

When Ellen tracks him down before his wedding night, he is at a loss as to how to break the news to Bianca. He keeps putting off the unpleasant business. Meanwhile, Bianca becomes frustrated by Nick's odd behavior (especially the non-consummation of their marriage) and calls in a psychiatrist, Dr. Kohlmar (Pedro de Cordoba). Further complications ensue when an insurance adjuster (Hugh O'Connell) mentions to Nick a rumor that Ellen was not alone on the island, but had the company of a Stephen Burkett (Randolph Scott) and that they called each other "Adam" and "Eve". When Nick confronts Ellen, she recruits a mousy shoe salesman (an uncredited Chester Clute) to pretend to be Stephen, but Nick has already tracked the real, appallingly virile and handsome Stephen down.

Nick tries to explain the situation to Bianca and Dr. Kohlmar, but they do not believe him ... until he is arrested on a charge of bigamy. In court, Judge Bryson (Granville Bates), the same judge who had Ellen declared legally dead and also married Nick and Bianca, annuls the second marriage. By this time, Ellen is no longer sure of Nick's feelings for her. Stephen asks her to marry him and return with him to the island, but she still loves Nick. In the end, Nick and Ellen are reconciled. 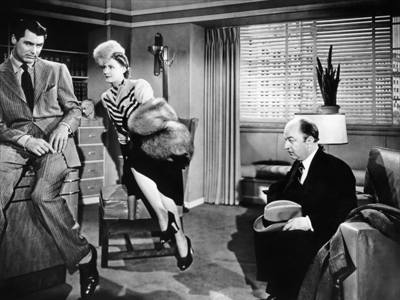 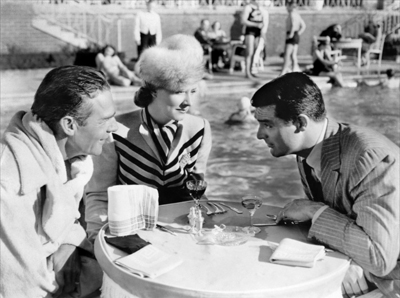 OTHER INFORMATION:
The film was nominated for three Academy Awards for Best Story, Best Score and Best Art Direction by Van Nest Polglase and Mark-Lee Kirk.

20th Century Fox began filming a 1962 remake starring Marilyn Monroe, Dean Martin, and Cyd Charisse under the working title of Something's Got to Give, which was to be directed by George Cukor. There were problems from the beginning, mostly due to Monroe's failure to show up on time for work. Monroe was fired and Martin backed out when the studio attempted to recast Monroe's role with Lee Remick. Following Monroe's death in August 1962, Doris Day and James Garner were cast, and the new version was released by Fox as Move Over, Darling (1963).
Film information from [wiki]