Film | The Girl From Missouri

Today was my day off and with some extra time to spare I decided to dig through my unwatched pile of recorded DVDs. A few years ago when I still had cable, quite a few movies I wanted to see came on late at night on Turner Classic Movies, so I decided to record them for viewing later. In that pile of movies was a disc from a Jean Harlow tribute that had 4 of her pictures on it. There aren't many of Harlow's films available to buy, so I was excited to rediscover this disc. The first of the movies I decided to watch was the 1934 romantic comedy The Girl From Missouri. I must say it is one of my favorite movies I have seen of Jean Harlow's. She played Eadie, the girl from the wrong side of the tracks that only wants to be married, flawlessly. I was especially impressed in the scene where Tom locks Eadie in his bedroom and she begs of him to let her be a lady. I haven't seen many films with Franchot Tone, but I found him a pleasure to watch. The chemistry between the two lead characters lead to a great movie watching experience. The movie has a great story, wonderful dialogue and a well rounded cast. My only issue with this movie is that my recording ended before the end of the movie, so I missed the last few minutes of the movie. Other than that small detail, I would definitely add this to my list of favorite movies... even though I usually call all classic movies my favorites. 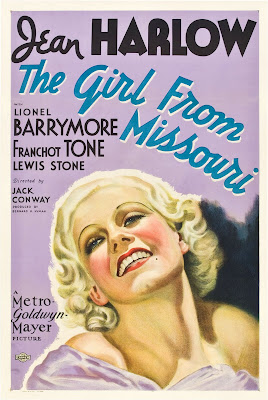 After Paige leaves Cousins in his study, Eadie slips in and immediately begins to flirt with him.  To Eadie's surprise, Cousins proposes to her and gives her a pair of jeweled cufflinks as an engagement present.  As soon as Eadie leaves, however, Cousins kills himself, and Eadie is suspected of stealing the cufflinks.  Because Paige helps her to hide the cufflinks from the police, Eadie makes him her new marital target.  Although the knowing Paige rebuffs Eadie's flirtations, she pursues him to Palm Beach with Kitty in tow.

At Paige's Palm Beach office, Eadie meets his admiring son, Tom Paige, Jr., but refuses to believe that he is related to the millionaire.  Tom, however, trails Eadie and Kitty and, after overhearing her gold-digging plans, arranges for her to board the family yacht.  To Eadie's humiliation, Tom then proves his identity when he introduces her to his father.  The embarrassed Eadie jumps overboard and is followed by Tom, who begins a frustrating two-week courtship of her.

In spite of her feelings for Tom, Eadie refuses to give in to his sexual demands, insisting that he marry her or lose her.  When she then turns down a diamond bracelet in favor of a proposal, career bachelor Tom confides in his father that he is genuinely confused about the gold digger.  Paige tells his son to invite Eadie to their mansion, confident that she will reveal her "true colors" in that setting.  After Paige leaves the mansion to attend a banquet, Tom tries to seduce Eadie and is startled when she tearfully begs for mercy.  Moved by her conviction, Tom allows Eadie to leave, then tells his father that he wants to marry the gold digger.

After Tom refuses to heed his advice to drop Eadie, Paige asks the District Attorney to assist him in a frame-up.  In her apartment, the unsuspecting Eadie is photographed in a compromising situation with a strange man and is arrested on suspicion of stealing Cousins' cufflinks.  Eadie then is rejected by a doubting Tom, who is to accompany his father on a European diplomatic mission, but is bailed out of jail by Charlie Turner, a married admirer.  Embittered and angry, a drunken Eadie plants herself in Paige's ocean liner stateroom and shows up in her underwear just as the reporters' cameras start to pop.  Before Eadie gives herself to Charlie, however, a repentant Tom rushes in and tries to convince her of his love.  At the same time, Paige shows Eadie a newspaper report in which he claimed that her frame-up was a plot by his detractors and that she and Tom already were married when her picture was snapped on the boat.  To keep his reputation intact, Paige insists that Eadie and Tom be married immediately y a judge, and Eadie finally is made a lady. 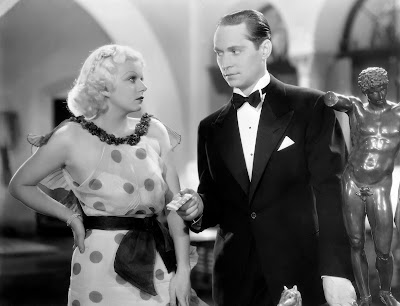 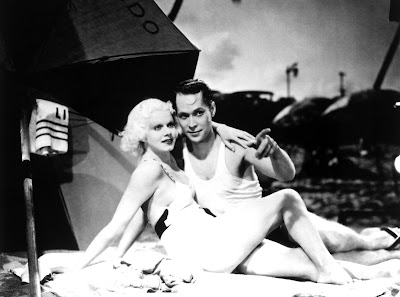 OTHER INFORMATION:
The working titles of this film were 100% Pure , Eadie Was a Lady and Born to Be Kissed .
Film information from American Film Institute