The only issue I had with this movie was actually in the special features. There was a behind-the-scenes featurette about the making of this film, and I was a little puzzled as to why Joan Crawford was described as 'eroding'. I thought this was a very disrespectful comment about Joan. Even if she wasn't pulling in the money she used to and no she wasn't in her prime, but she gave all of Joan Crawford to this role. Respect should be given where it's due. [end rant] 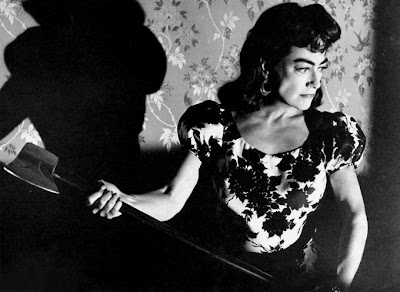 "Lucy Harbin took an ax, gave her husband 40 whacks. When she saw what she had done, gave his girlfriend 41,"

MOVIE PLOT:
Lucy Harbin has spent 20-years in a psychiatric hospital for the decapitation axe-murder of her husband (Lee Majors) and his mistress, after catching him cheating on her. After she is released, she takes up residence at the farm of her brother Bill Cutler and sister-in-law Emily.

Lucy's adult daughter Carol (Diane Baker), an artist and sculptress, also lives on the Cutler farm and is seemingly unaffected by the grisly murders she witnessed many years in the past as a three year-old child. Carol encourages her mother to dress and act the way she did in the past. Lucy begins playing the vamp and makes passes at her daughter's fiance Michael Fields. She then shocks his parents with a sudden tantrum when they consider their son's marriage to Carol out of the question.

A series of brutal axe-murders begin with the hired man Leo becoming a victim as well as Lucy's doctor, who is found in a freezer. All signs point to Lucy as the murderer and some believe she is still insane, and should be returned to the hospital. However, the climax of the film reveals that the axe-murderer is Carol, who has gone to great lengths to portray her mother as a still-active murderer by duplicating her mother's appearance when she kills (even to copying her mother's head and face with a mask she fashioned herself). As the film ends, Lucy calmly accepts her responsibility for her daughter's illness and hatred and announces that she is going to Carol in the hospital where she is now confined. 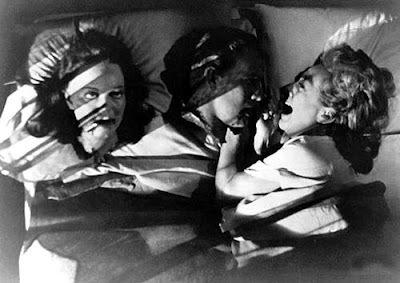 Lucy waking up with her dead husband's head. 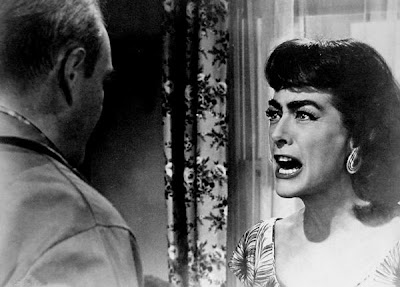 Lucy losing it with her doctor. 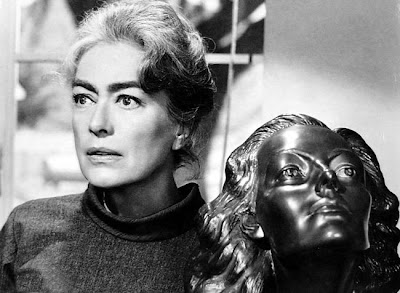 This statue by Yucca Salamunich was originally given to Joan on the set of A Woman's Face
OTHER INFORMATION:
Joan Crawford replaced Joan Blondell in this film after she was injured on the set of another film. Crawford demanded control over almost every aspect of the film (script, wardrobe, & cast approval). At Joan's insistence Anne Helm was replaced by Diane Baker as Lucy's daughter Carol. You will find Pepsi product placement throughout the film, the role of Lucy's doctor was actually played by the vice-president of Pepsi. If you look at the Columbia Pictures logo at the end of the film, you may notice it has changed a bit for this film. 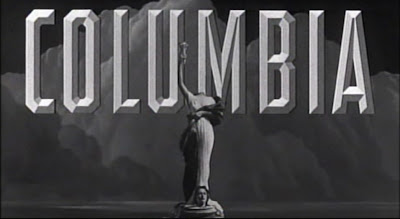