Do the terms 'recording-artist' or 'singer' come to mind when you hear the name Bette Davis? Well it should, because throughout her long career, Bette full-filled that title quite a few times. Continue reading to learn about Bette Davis... the singer. 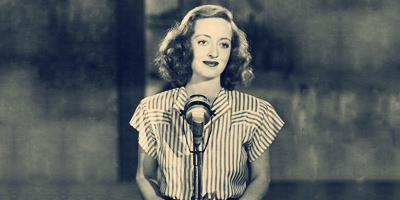 The first time we would see Bette Davis sing was in the 1943 star-studded World War II film Thank Your Lucky Stars. In the film Bette performs the comedic war-related song "They're Either Too Young or Too Old."

In 1952 Bette Davis starred in the Broadway musical Two's Company. A soundtrack to this show was released as an LP featuring 5 tunes by Bette ('Turn Me Loose on Broadway', 'Roll Along Sadie', 'Purple Rose', 'Just Like A Man' & 'Finale')

The next time we would see Bette sing on screen would be in the 1962 film Whatever Happened Baby Jane? where we see her, as former child star Jane Hudson, belt out the tune "I've Written A Letter To Daddy." 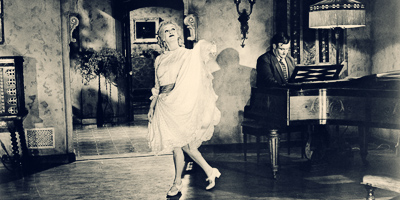 While promoting Whatever Happened To Baby Jane, Bette made an appearance on "The Andy Williams Show" on December 20th, 1962. On the show she performed a tune she performed in the 1952 Broadway musical Two's Company called "Turn Me Loose On Broadway" and the rocking number "Whatever Happened To Baby Jane."
On February 21st, 1965 Bette Davis made an appearance on the television show Hollywood Palace. Here we see her perform one of her non-movie related music recordings, 'Single.' In her 1987 memoir, she explains this song was written in response to Richard Burton's 'The Married Life.'
On March 1st, 1965 Bette Davis, along side Olivia DeHavilland, made an appearance on the television show "I've Got A Secret" to promote their upcoming release Hush, Hush Sweet Charlotte. Bette went on to sing the title track "Hush, Hush Sweet Charlotte." [Bette had also hoped to sing the song at the Academy Awards, but the song became a Top 10 hit for singer Patti Page]
Also in 1965, Bette recorded a two-sided single for Bell Records titled "Life Is A Lonely Thing"/"Mother Of The Bride". 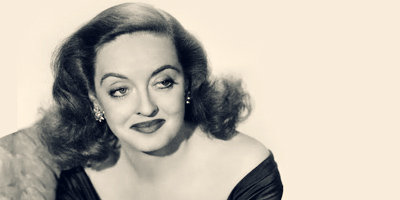 Bette Davis' last adventure into music happens in 1976 when she teamed up with EMI Records. The 68 year old actress recorded "Miss Bette Davis Sings!" at Abbey Road Studios in London with producer Norman Newell and arranger/conductor Roger Webb. The two gentlemen worked within Bette's limited vocal range to produce an album that any Bette Davis fan would love. Half of the songs are from Bette Davis' films. We see her recreate "They're Either Too Young or Too Old", "It Can't Be Wrong" [from Now, Voyager], "I've Written A Letter To Daddy", 'Hush, Hush Sweet Charlotte' [the title track of that film], and even some dialogue from All About Eve.
The other songs on the album were more mature and philosophical, particularly the Newell/Webb contribution "Growing Older, Feeling Younger."


I do not think anyone would call Bette Davis a great singer, but as you can see from the above examples, she could definitely hold a tune. She had a distinctive, identifiable voice that she used to act out every syllable of her lyrics. This is just one more thing Bette Davis could not do wrong.


Here is one last video of Bette Davis singing. This one comes from 1977 with Bette singing 'I Wish You Love.'

If you are interested in purchasing a copy of "Miss Bette Davis" visit iTunes or Amazon.